Cairndhu House is a crumbling Victorian mansion located off the Coast Road in Carfunnock Country Park, Larne, Northern Ireland. It was built at some point after 1878, as a summer residence for the wealthy Scottish textile industrialist, Stewart Clark, who had married a young woman from Larne. It was compromised of two storeys and had a picturesque wooden veranda encompassing the front as well as a spacious balcony above. In 1897, the home was extended by Samuel P. Close and in the process, it became a multi-gabled home which could entertain a large number of visitors at any given time. The last major work at the home was the addition of the south wing which was completed in 1906.1

The large wooden front door on the north side of the home led to a large hall, inside which the main feature was the grand oak chimneypiece with elaborate carvings depicting the “Jolly Beggars” and the departure of the Mary Queen of Scots from Loch Leven Castle. Off to the side was a billiard and smoke room as well as a magnificent drawing room. Towards the back of the home was a schoolroom and rooms for the housekeeper and steward. There were 60 rooms within the stately home and acres of land, some of which would be transformed into scenic gardens boasting of a plethora of plants and flowers.

In 1907, Mr. Clark passed away but the home was still regularly used by his wife, Annie Clark, and their daughter, Robina Elizabeth Clark. When Mrs. Clark died, Robina continued to visit the home as a summer residence until 1918, when it was sold to Sir Thomas and Lady Dixon for £8,000. The land at Cairndhu House was used for grazing cattle which had been bred for beef. Throughout World War II, it was used as a war hospital. Then in 1947, after the Dixons had lived at Cairndhu House for 40 years, they donated it to the Northern Ireland Hospitals Authority who transformed it into a convalescent home.

The Sir Thomas and Lady Edith Dixon Hospital opened its doors in 1950 and it was the first convalescent home owned by the Northern Ireland Hospitals Authority. It could accommodate up to 40 patients with a maximum stay of six weeks. It included two dining rooms (one for males and one for females), a reception room, a nurses’ sitting room, hall, bedrooms, bathrooms, separate men’s and women’s sitting rooms, a library, billiards room, a surgery and examination room as well as a putting green. When it first opened, it was self-sufficient with staff hired to look after dairy cattle and run the large vegetable garden.

In 1986, the convalescent house closed for good and would be acquired by Larne Council as part of the Carfunnock County Park estate. Then in 1996, Larne Council sold Cairndhu House and its 22 acres of land it to a property developer.

Since then, however, Cairndhu House has been left abandoned and has fallen into a state of extreme disrepair. As seen from the photographs, much of the ceiling has caved in on itself and much of the home is inaccessible and graffiti is emblazoned on the majority of the walls, both inside and outside. What was once a grand and regal building is now crumbling into nothingness; many fittings, including feature fireplaces and an ornate staircase have become victim to both time and vandalism.

In 2015, director Ridley Scott filmed part of his sci-fi thriller, Morgan, at Cairndhu House. The plot line of the movie followed a corporate risk-management consultant who was summed to a remote research lab to determine whether or not to terminate an at-risk artificial being. Tremendous work was carried out at the site so that filming could take place in a safe environment. 2

With such a rich history, it’s no surprise that Cairndhu House is the alleged scene of much paranormal phenomena.

Derek Sweetnam, who was the estate manager after the sale in 1996, said that it wasn’t uncommon for the gardeners and carpenters to hear unexplainable and bizarre noises emanating from underneath the floorboards. “Some are convinced it’s haunted…” he said.3 Jim McElhinney, who had worked as a security manager for five years, said that his office was on the top floor of the home. On his first night, he had brought along his pet Jack Russell for company and at around 1AM, he heard an extremely peculiar noise. As he said: “It sounded as if someone had lifted a hammer and rattled it on the radiator of the room I was sitting in.” He said that his dog ran over to the radiator and started barking at it and sniffing around it. The following night, he heard the exact same mysterious noise but could never ascertain what it was or what was causing it.4

In 1992, Stanley and Hazel Glenn accompanied their wedding photographer to Cairndhu House to capture some atmospheric photographs of their special day. As Hazel recollected: “We were a wee bit nervous because we had heard stories about the place and it had been deserted for years. Both me and Stanley felt a bit strange but we soon forgot about it with all the excitement of our wedding day and all.” Shortly thereafter, however, the couple received their wedding photographs and were horrified to see a shadowy figure gazing out of one of the windows. According to Stanley and Hazel, the figure was a nurse, sadly gazing into the world of the living. Hazel stated: “I’ve never felt stranger in all my life. Neither me nor Stanley have been back near the place since and we wouldn’t go back – no way. The place is haunted, there’s no doubt about that.”

Then in 1997, wedding guests at the home discovered a child in Victorian dress lurking in the background of a photograph. The apparition of the child only appeared in one photograph out of 28 of the same scene. After catching wind of the alleged paranormal activity, ghost hunting company, Shadows, decided to investigate further. According to one of the paranormal chasers on the team, when they arrived, the unlocked front door refused to open for them no matter how hard they pushed it. They went into the gardens and asked a worker to open the front door and it opened with ease. “He said it was impossible to lock that door,” said the paranormal chaser. When they entered the mansion, they all felt a strong presence.5

In addition to the eerie photographs, there have been numerous reports of dogs becoming spooked while walking in the area of the home or unexplainably barking when there appears to be nothing – or nobody – in sight. In fact, Cairndhu House is said to be the most haunted house in Northern Ireland.

Cairndhu House is currently owned by brothers, Des and Leon Loughran, and in 2020, it was announced that there were plans to turn Cairndhu House into a retirement village which would consist of 80 bedrooms and retirement cottages with access through Carfunnock Country Park. It would run as a nursing facility with palliative care space and it was estimated that the cost of the project would cost around £25 – £30 million.6

Additional Info:
A dangerous explore with collapsed roofing and flooring. 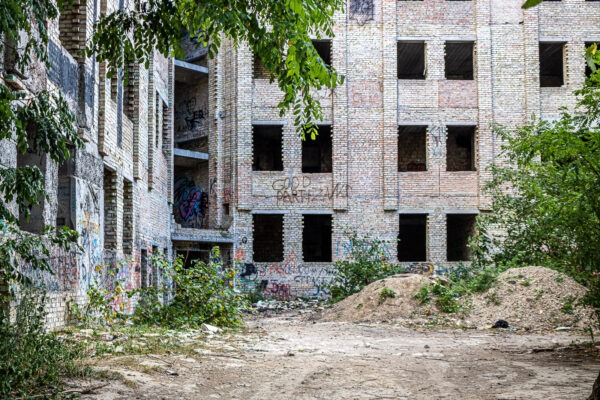 This unfinished asylum on the outskirts of Kiev was cancelled in the early 1990s not due to the fall of the Soviet Union but due to many contractors falling to their death or suffering life changing injuries.