On 2 April, 1916, two German navy airships made a silent passage over the North Sea. They flew over Edinburgh and inflicted the first ever air raid on Scotland. 24 bombs fell in the capital city, killing 13 people and injuring another 24.

At the time, Scotland lacked an attack warning system or even adequate air defence. In the wake, plans were made for an air raid warning system as well as air defences including airfields. One of these airfields was located in East Fortune, a small village nestled in the hills just outside Edinburgh.

Following WWI, many military airfields were converted to industrial parks. However, East Fortune was preserved. During the cold war, it was used as a food stockpile for recovery should the country become involved in a nuclear war.

In 1922, East Fortune Hospital was developed on a plot of land located beside the airfield. Initially, the plot of land had been developed as farmland by William Bell, but it was purchased by the Admiralty.

As tuberculosis swept throughout Scotland, it was decided that a sanatorium was needed to combat the bacterial infection. The site and buildings were purchased by the Joint Sanatorium Board for £70,000. It cost an additional £10,8000 for the electric generating station.

With its one-story wards, lawn and flowers, it gives the impression of a holiday camp – the more so because there was a garden fete in the grounds while I was there.

The hospital contained 210 beds for men and women and there was also a ward for children. While the vast majority of the patients were suffering from pulmonary tuberculosis, there were a handful of those with bone, joint and glandular tuberculosis. Verandas were added to the wards at the hospital for open air treatment and later, a boiler house was added, as well as laundry, theatre and a plaster room.  It only continued to grow, with a kitchen garden and orchard being built

To continue combating tuberculosis, services were increased at East Fortune Hospital, including the employment of more nurses and doctors and increased beds. By 1935, they had appointed their first consultant surgeon, Dr. Walter Mercer, and a sisters’ home was added as well as a house for the assistant medical officer.

At the outbreak of WWII, East Fortune Hospital was transformed into a military hospital to treat civilian casualties. It was taken over by the Department of Health. Extra beds needed to be added, taking the total up to over 400. This was made possible by the addition of three wooden wards which held 22 beds each, and other smaller wooden huts.

While those with tuberculosis would mostly spend years at East Fortune Hospital, in 1943, the drug Streptomycin was isolated, and it was discovered that it could treat a number of infectious diseases, in particular tuberculosis. In 1949, the first human trial of Streptomycin against tuberculosis was carried out and it was found to cure patients.

It was hailed as the “miracle cure” and patients with tuberculosis could sometimes be out of hospital within two years. While it certainly was an advancement in the treatment of the bacterial infection, it wasn’t the be all and end all. In fact, the drug didn’t work at all on some patients while it completely cured others. In addition to medication, East Fortune Hospital conducted collapse therapy, fresh-air therapy, gold treatment, immobilisation, and diet therapy.

By 1951, East Fortune Hospital had grown even further. More wooden wards were built as well as improved lab-facilities and a more modern canteen was built. They appointed a trainee laboratory assistant researcher, who would research new therapies and medications, and later, the hospital began to utilize art therapy. Eventually, there would be over 1000 beds at East Fortune Hospital as well as a church and even a fire station.

In 1954, the Air League of the British Empire put forward a plan to erect a memorial for the historic flight of the British airship R.34, which was the first crossing of the Atlantic from east to west which happened in 1919.

It was decided that the memorial would be placed at the entrance of East Fortune Hospital, which was almost the very spot from where the airship departed for New York on the 2nd of July, 1919. A ceremony was held in May of 1954 to unveil the memorial, with five members of the R.34’s crew in attendance.

East Fortune Hospital closed its doors for good in 1997. Before this, it was hit by an asbestos scare when it was uncovered that one block of the hospital was contaminated with asbestos. The historic hospital has since been left abandoned, and each building has an asbestos warning.

There were plans to redevelop the derelict buildings into luxury homes in 2006. Due to the historic nature of some of the buildings, developers were not allowed to just knock them down. Instead, they needed to restore the buildings and incorporate them into their plans. The plans would be denied by council chiefs who said that the plans had failed to “safeguard” the listed buildings. 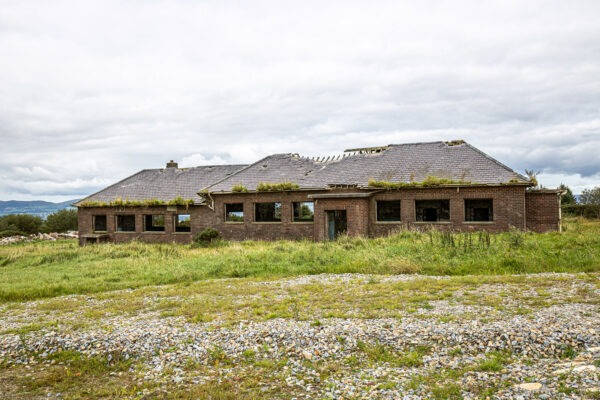